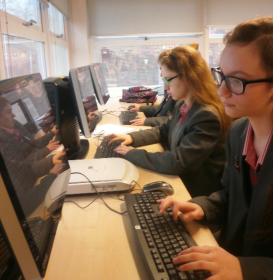 A few months ago I showed you this project for school students with English as an additional language. It was designed as a subtitling intervention to boost both educational standards and community integration.  I’m quite excited about it. Today’s article is about the initial prototyping stages, I’m going to talk about both the things that went well and the things that went wrong.

Finding Schools
For White Water Writers I regularly visit groups of teachers to talk to them about that project.  Over the last few months I started adding an part to the presentation that  essentially said “Hey, so that project is cool and tested and reliable. If any of you are interested in an completely untested and possibly-won’t-work idea, then here’s a 30 second elevator pitch.”
A few schools contacted with me to say they would be interested. I picked a local one in Islington talked the ideas over with the co-ordinating teach and I started to pilot the project with a group of Polish girls (it’s an all-girls school).
The first pilot session
For our first pilot session I provided a few handouts and wrote some simple code to assist. The test case was an episode of ‘The Musketeers’ and I produced a lesson plan with a suggested workflow. I had a very small group (only three) who worked in Google Docs to directly edit an XML file.

You can look at the original file here if you really like.
Students broke down the meaning of the English wording by working as a team, then they discussed the translations, the sense and the meaning. They chose words that were relevant to the age of the characters and their social status. It was clear that they were stretching their knowledge of both languages while also developing their narrative. It went better than I could have imagined.

Iterating the process
The initial attempt was wildly successful, and the fact that we piloted on a weekly basis has meant that each week I was able to present the students with a more and more streamlined process.  So on the second week they were editing a more structured Google Spreadsheet rather than a XML file.

By the time of third week I had added some scripts to make the transfer to a moving image easier and some highlighting code to make things easier to work with.
For the last few weeks (as the group grew) I added some examples of machine translation of each bit of the subtitles (I’d noticed that the students were occasionally resorting to looking up words) and while the machine translations are wrong very regularly, they do allow the students to get that word that is on the tip of their tongue when they are translating properly properly.

That’s the technological changes. We’ve also changed the workflow. The translation method that instinctively appeals to me is to keep playing small clips of an episode to hear the tone, or to work from a handout formatted as a script,  but this was some distance away from the way the translators wanted to work.  If anything the students would rather do the translation and then watch the episode –  so we changed how we present information.

Each week I’ve been able to get a stronger idea of the level of television program that works well, and the amount of text that a group can get through in a hour.   With our prototype group we started ambitious and worked down until we found a level that the kids could really manage in a one hour session.  I now realise that was backwards. What I should have done is started with some really simple programs – preschool and primary school style (perhaps several in a lesson) and worked our way up as the kids got used to the methodology.
Co-design
This prototype phase is an important part of our co-design strategy.  For example, one of the things that wasn’t obvious to me or the co-ordinating teachers was that students aren’t necessarily totally bilingual. Depending on how recently they came to the country they have a greater or lesser proficiency in either Polish or English.  This manifested in a very instinctive ‘production line’.   The students who had grown up in the UK provided much of the English context around the words and the students who had moved here recently provided much of the subtle distinctions in Polish.  It was a fascinating thing to watch happen.

Showstopping
For the final week of the prototype (at which point I think we’d reached nine translators). The translators picked a episode from a TV series and invited parents around to watch it with subtitles.

There are several great things going on here.  Neither I nor the teacher had any knowledge of Polish, and so the student knew that  a) we weren’t going to be any help and b) we weren’t going to get the blame if someone snuck something rude into the translation. We were trusting them completely. More to the point – the deadline is a hard deadline.  There parents are definitely turning up, and it’s going to be a pretty noticeable if the subtitling goes a bit quiet…

The students performed amazingly.  The translated, proofread, rewrote, altered, worked thought. Some of them took on organising roles and every so often there would be a quick group conversation about such things as ‘Do we change character names to their Polish Equivalent?”

…and then the parents came.  We took over a glassroom with a dataprojector and… everything worked. It just worked.

As a group we watched right the way though an episode of ‘Eve‘ correctly subtitled. It was wonderful.  Once it finished I read the audience (with translation) the audience a congratulations message I’d got from the Series Producer of Eve, which got a really sweet reaction.

Next Steps
What’s been clear so far is that, like TooManyCooks, there’s a minimum size of group for this process to work.  However, we’re yet to work out exactly where this is, and how much it changes with different age groups.  I’ve also got to do a little bit more work on making the technology usable.  Currently I need to be at the school every week to have the more complex bits of the workflow working, but once that’s out of the way the teachers will be able to run the system directly.  And once I’m out of the loop we can expand much much faster.