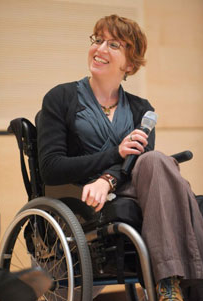 Liat Ben-Moshe is Assistant Professor of Disability Studies at the University of Toledo. She holds a PhD in Sociology with concentrations in Gender Studies and Disability Studies from Syracuse University. Her recent work examines the connections between prison abolition and deinstitutionalization in the fields of intellectual disabilities and mental health in the United States.

She’s also one of the editors of the newly released Disability Incarcerated: Imprisonment and Disability in the United States and Canada which ‘offers an outstanding collection of interdisciplinary scholarship examining the incarceration and segregation of people with disabilities’. Liat very graciously agreed to make time to be interviewed about the book, and left me wanting to find out so much more about the topic.  I hope you feel the same way.

You’ve been working on this area for a while, indeed your PhD tackled related subjects –  with the publication of  Disability Incarcerated, do you feel that this particular disability research area is starting to get more traction with the wider community or is it a natural update of the field?

One of reasons this book came about was because we felt there was a lacuna in the field, in multiple fields actually.

I write a little about this lacuna in my piece in Critical Sociology (the article is called Disabling Incarceration). When I started doing this research about the connections between prison abolition and imprisonment to deinstitutionalization (through the lens of disability studies) I didn’t find very many sources to draw on. People that did really important work in researching and trying to put an end to the Prison-Industrial-Complex were not very good at incorporating disability justice or disability studies framework into their analysis or activism. If disability was mentioned, it was only in the sense that there are many people with disabilities in prisons, especially those who are categorized as ‘mentally ill’. But disability wasn’t used as an analytic to discuss processes like criminalization or incarceration more broadly, which is exactly what we set out to do in this anthology. On the other hand, people who did organizing or research in disability studies were not very well versed in understanding the ways in which incarceration had been a part of the disability experience for a few centuries now but had become neutralized and unmarked in many ways. So this collection is also a way to ameliorate that.

When we, Chris Chapman and I, (and later Allison Carey as well) first began thinking of this book we were trying to come up with as many people as possible who do this work, especially from an intersectional lens. What I mean are people who examine both disability and incarceration or decarceration from a critical stance that takes into account other forms of privilege and oppression in relation to race, gender, settler status, sexuality, nationality etc. and although I don’t think each individual chapter does all of these things, I think the collection achieves this as a whole. So we hope that this book becomes a conversation starter (as opposed to the definitive word on the topic) and that it generates more interest in this area because there is definitely a dire need for it, in terms of intersectional scholarship but also in terms of (as the ADAPT’s motto states) ‘freeing our people’.

To choose an example at random from the book – you make the case that we should view group homes as incarceration – this can be a little difficult for laypeople to get their heads around, particularly when many care home users may flourish in the new environment – can you give us a short overview of your perspective?

In order to answer this question properly, let me quote a few paragraphs from our editor’s introduction to the book, where we introduce our framework (with its caveats):

Regarding group homes for example, we state on page 12:

“The large-scale institutionalization of disabled people, where it is rationalized as necessary specifically because of a disability, has declined since the 1970s in the United States and Canada. And as institutions declined, community-based services emerged. But these have not offered the panacea that was desired. Like Ferguson noted regarding the similarities between the almshouse and the institution, so too are there similarities between community-based services and medical institutions. Community-based services are often run with a similar medical model and an asymmetry of power between staff and consumers (Drinkwater 2005; Rothman and Rothman 1984). They at times demand that people earn what should be basic rights to movement, privacy, and choice (Taylor 1988). They often create artificial homes and relationships without the true qualities (McKnight 1995).”

We also discuss what we mean by ‘institutionalization’ (on page 14):

“Taking into account the wide range of sites that have evolved from the earliest undifferentiated confinements, today we need to ask: What is an institution? What is institutionalization? What is its relationship with imprisonment and other forms of physical confinement? Among what he called total institutions, Goffman (1961) included sites that featured no locked doors or bars on the windows. And yet his work may not adequately address the diverse mish-mash of institutional sites in our communities today. Centering these sites’ relations to penal imprisonment, Foucault termed this mish-mash “the carceral archipelago” (1995). We are nuancing this slightly to call it an “institutional archipelago,” made up of diverse services and spaces that all trace back to undifferentiated confinement and its ongoing reform— – in which penalty is no more or less central than medical care or the right to education. However diverse, these sites also share something in common. It is not stated purpose, and it is not degrees of freedom of movement. These would have one separating the penal from the medical from the educational, or separating closed sites from community services, none of which honor the shared genealogy of the institutional archipelago or the resonances still felt across its diverse sites today”.

Lastly, we discuss what we mean by ‘interlocking analysis’ by explaining that:

“To propose a more thoroughly interlocking history is to suggest that the similarities and the distinctions across sites are important to consider, in terms of rationality, practice, and the effects on people who are incarcerated in diverse sites of confinement. For example, at least on paper the penal system offers certain protections to the accused and the prisoner, such as due process during the trial and sentencing procedures, a sentence of a specified duration, and protection against cruel and unusual punishment, medical institutions allow the compulsory admittance of patients against their will based only on a medical diagnosis, an indefinite time of commitment, and ‘treatments’ that can be painful and harmful, such as extended isolation, physical restraints, and electric shock ‘therapy’ (Conrad and Schneider 1992; Goffman 1961; Snyder and Mitchell 2006; Szasz 2009).

Broadening the historical and institutional lens also enables innovative readings of historical changes. We do not wish to diminish the gains of the closure of many institutions. This has taken place, however, at roughly the same time as an unprecedented rate of American prison expansion beginning in the 1980s—and we want to encourage disability and prison activists alike to attend more closely to what this means and what can be done about it.” (page 15-16).

Love it! I’m normally on other end of the ‘as I wrote before’ response Now, the book has been described as ‘activist scholarship’ (frankly I’m annoyed that I don’t get described that way), is that a label you identify with, or do you believe that academics and researchers should stay detached from their field?

I wholeheartedly endorse the label of scholar/activist or activist scholarship. I came to the field of Disability Studies as someone who identifies both as a disabled person and also as an activist. I came to undertaking this research on the intersections between prison abolition (the demand to abolish the current system of incarceration as well as the carceral logics that sustain it) and deinstitutionalization (the demand to close down institutions for people labeled as intellectually and psychiatrically disabled) as someone who has a stake in these movements, thinking that they could learn a lot from each other. For instance, deinstitutionalization shows us that decarceration is possible and already happened and demonstrates some ways by which we can do it again, but also some of the pitfalls of doing it in certain ways and not others. So I regard this research as not just being about activism, but as being activism. It is meant to make us think, to question, but also to incite change.