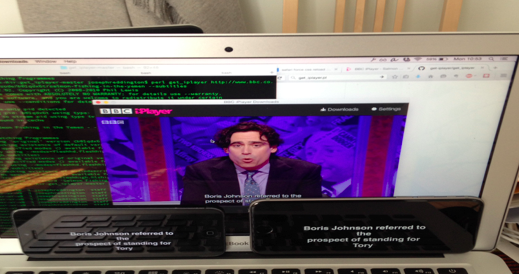 So the Supertitle Project is starting to rise up a little bit, and it’s time to talk about where it is right now.  As you know, the Project was funded by the National Lottery to expand it into a broader piloting/research stage.  This means three things for me:

To make this happen I’m doing a lot of school visits, talking to teachers, finding out the best ways of working with schools so that their needs are met. I’m only visiting schools in the N and NW areas of London at the moment, partly because I live in NW, but also because I have other projects running in other areas of London and I think it’s best not to be bombarding schools with quite so many unusual ideas.   There are three involved right now and I’m hoping to make it ten by Christmas. If you know a school that might be interested, please get in touch.

The code is coming around.  More and more of is is automatic and right now it can be used easily without me on site – but it does need a significant polish to make it pretty and friendly looking. On the other hand – the demos are pretty:

This one is in English, simply because I didn’t have a translation handy – but it demonstrates the use case- students are given a file to edit and another file that lets them bring up the subtitles on a device they can just place near the TV. Everything syncs up nicely.

This is in two parts – on the one hand I’ve got a excellent PhD student who has experience in this sort of work – he’s preparing me a couple of research tools to give to students that are involved.  There’s a bonus to this. While the point of having proper research done on a project is clearly to make sure it works, it is also nice to have a nicely formatted pdf file full of p-values and carefully checked statistics to give to both schools and potential funders.

I’m hoping that by next May, we’ve set up regular Supertitle groups in a range of schools, and released research that show the project makes a significant difference in terms of student outlook. I’m also hoping that the code will be tight, and perhaps we’ll have even attracted a couple of other developers to extend it.