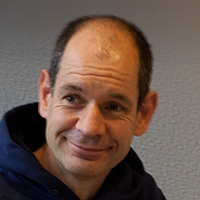 Today’s guest post is from Mark Saville of the very wonderful SpecialEffect, a UK based charity which uses video games and technology to enhance the quality of life of people with disabilities. Regular readers will remember SpecialEffect as the charity that benefited from our Flowers For Turing Project, and today I’m really impressed with the thought and dedication that’s gone into this guest post. I suspect we’ll be inviting Mark back for more…

A real honour to benefit from Joe’s Brilliant Flowers for Turing idea last month, and huge and sincere thanks to Joe and everyone who donated.

The money you raised will go directly towards helping people with physical disabilities experience a better quality of life through activities like video games. It’s work that involves a range of approaches, including modifying or creating gaming setups that we can loan and support. As there’s no one-size-fits-all way of doing this, we visit people across the UK to find out exactly what they want to play, what they need to play it, and then put together setups around their individual abilities.

There are a few companies creating controllers for disabled gamers, and we’ve often found that specialist support from our team makes the difference between them being successful or not. We’re also often able to link up such equipment with other hardware and software to get the most out of it.

When we need to mod further we’ve got a couple of members of staff who are handy with a soldering iron. Many of the mods they do are repositioned controller buttons or joysticks, or breakout interfaces for people who can’t hold or use a games controller effectively. And sometimes others step in with a helping hand. Here’s a PlayStation controller with a breakout box that was kindly made for us by the engineering department of a local company.

Getting an effective setup is all about the details really, and it’s amazing what a small modification to a controller can make, though. I posted this story the other day about a mod we did for a guy called James (http://www.specialeffect.org.uk/specialeffect-news/two-small-buttons) that illustrates just this point. Two small remapped buttons in the right place and he’s away.

Below: James and his adapted controller:

Another example is the Razer Onza game controllers with the dial-in resistance on the analogue switches. For some of the people we see with very sensitive finger movements, having that adjustment available is incredibly useful.

Sometimes technology doesn’t always provide the complete solution though. We visited Martin, a 27 year-old gamer with a spinal injury who can’t move his fingers or thumbs. He uses an Xbox controller with a strategically-placed water bottle in his lap to hold it in place. He has really good arm movement and he’s great with the analog sticks and the face buttons, but when he wanted to aim and shoot he had to brace the controller with one arm and use his other forearm to hit both the left and right triggers. This delay meant that he would often get shot while he was moving his arms.

We positioned switches that act like the trigger buttons to the side of the controller where Martin could rock his hand onto them, and put an extension on the right stick to give him more accurate control over his aim. But the vital stabilizing component in all this was the water bottle, so we kept that. We could have used some expensive mounting equipment to keep the controller in position, but the bottle was doing the job just fine, and Martin was used to it.

No matter how advanced the tech, success is still dependent on the small print. We’ve begun working with a man with locked-in syndrome who has no movement except an upward movement of his eyes, so last week we were chewing the cud with the guys from g.tec to see if we could use their biosignal system to harness the electrical impulses from the muscles controlling the eyeball. The other alternative we’re looking at is a Kinect running on a PC with the Kinesic mouse software. Both options might provide a way forward, but it’s a case of sitting down and working intensively with the individual to find the best solution.

Below: Testing an eye muscle setup with the g.tec biosignal system

Our occupational therapists play a massive role in everything. They bring a huge amount to the process, including making sure that the mounting and positioning of the equipment is safe, and often spotting and coaxing extra tiny finger or hand movements – movements which can make the difference between being able to play games or having to sit and watch. They’ve got a whole bunch of wonderful stuff in their boxes – padded garden twine, heat-mouldable resin, different types of Velcro… all useful in some way.

There’s a surprising variety of disabilities to overcome as well. As well as helping people who have accessing issues as a result of conditions including cerebral palsy, stroke, combat injury and muscular dystrophy, we’re constantly learning about the subtle ways that disability keeps people from enjoying video games.

Take Rossanne, for example. She has Fibromyalgia, where the pain is concentrated in her hands and arms. It’s almost like heightened sensitivity in these areas caused by all movement; she especially has problems with repetitive pushing of buttons, and she can feel pain by even the slightest touch.

We visited her and set up a head mouse for navigating the screen, switches on the floor to move her character and for the left mouse click, voice control for keyboard presses and macros, and used her voice recognition software to convert her speech into text, so she can reply to people texting her in-game. It’s given her a setup that lets her play her games without needing to use her hands or arms at all.

Below: Rossanne trying out her gaming setup:

All in all, it’s pretty intensive and diverse work and the demand for our help is growing all the time. If you’d like to know more about the difference we’re making there’s some case studies and how-to videos on our YouTube channel at https://www.youtube.com/user/GameOnForEVERYONE.

All our help is given without charge, so the donations from the flowers is extremely valuable and very, very welcome. Thank you again!!