A few months ago in November, Open Voice Factory was featured on Disruptive Tech TV. This is the first UK 24/7 technology TV channel covering  technology news and events worldwide. Open Voice Factory applied to be on their Disruptive Pitch TV show. Described as a sort of Dragon’s Den, it’s an online TV program for the UK’s most aspiring technology entrepreneurs, startups and emerging companies to pitch themselves to a panel of judges for the ultimate prize to a chance to keynote at the Cloud Expo Europe 2017 at ExCeL in London.

For those not in the know, Cloud Expo Europe is THE only conference to attend if you are anyway involved in the cloud technology sector. The event is huge with industry visionaries and leaders attending. What’s more all the Disruptive Pitch finalists had the opportunity to network with major technology vendors and partners before and after the scheduled event.  It was an unmissable opportunity for  Open Voice Factory and eQuality Time to get noticed and start building awareness 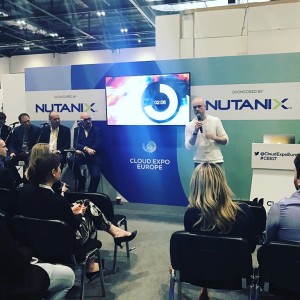 The conference was incredible, hoards of people everywhere listening to keynote speakers from Google, Twitter and even the Ministry of Defense. There was a total of nine finalists all battling it out to be the overall winner of Disruptive Pitch. Once again, Joe gave it his all and he must have done something right because Open Voice Factory came third overall!

Here’s what Joe said about the experience “I was pleased that we even won our round, so to come third feels like a great achievement and I’m confident that Open Voice Factory will continue to grow and help more and more people all over the world.

If you would like to watch Joe giving it his all  in the first round and blowing the judges away with his fantastic pitch for Open Voice Factory, then make sure you watch the episode here:  https://www.youtube.com/watch?v=fE5M2TsLO1k

We’ve all been really impressed here with Joe’s pitching skills, show your support and comment below!