Today’s feature comes from Samiya Parvez of Andiamo – everything about this story made me want to share it- Joe.

In 2003 I gave birth to our son Diamo. He was born severely disabled and was diagnosed with Cerebral Palsy and he was quadriplegic. Little did we know how profound an impact Diamo would have on our lives and potentially that of millions of others. Today, three years after our son’s death, we’re using Diamo’s legacy and our experience with caring for a disabled child to improve the health care industry.

From the day Diamo was born until the day he passed away, he required around-the-clock care. One crucial element of this was giving his body support through medical braces, called orthotics. Without his back brace he couldn’t sit up straight or eat properly. He wasn’t even able to sit in his wheelchair without slipping out of it. He could become house bound as it was unsafe to put him on his wheelchair without a back brace. As a growing child he required new braces regularly, making simple things like buying him fitting, comfortable clothes almost impossible. We had to wait for his ankle foot orthotic to be fitted before we could buy him shoes! He would need to be measured again in 6-9 months anyway. However it could take up to three months from measurement to delivery, meaning he had often outgrown it before he got it! Now the waiting times have increased to six months for children and some adults have to wait for a year.

As a result, we spent a lot of time and effort fighting the health system to improve our son’s well-being. We kept researching to find better alternatives. But realised there was nothing out there that was better, faster to make, and cheaper. For example to get a specialist back brace that was more comfortable to wear during the night, we had to pay £4000. But who can afford that every 9 months and for multiple orthoses. In the midst of our research the stories of 3D printing were coming up but nothing caught our imagination. Unfortunately Diamo passed way before we found a solution.

A year after Diamo had passed, Naveed (my husband and cofounder) attended a tech conference called MonkiGras and came up with a revolutionary idea. He learnt that 3D scanning and printing had come a long way, it was now good enough to create orthosis. 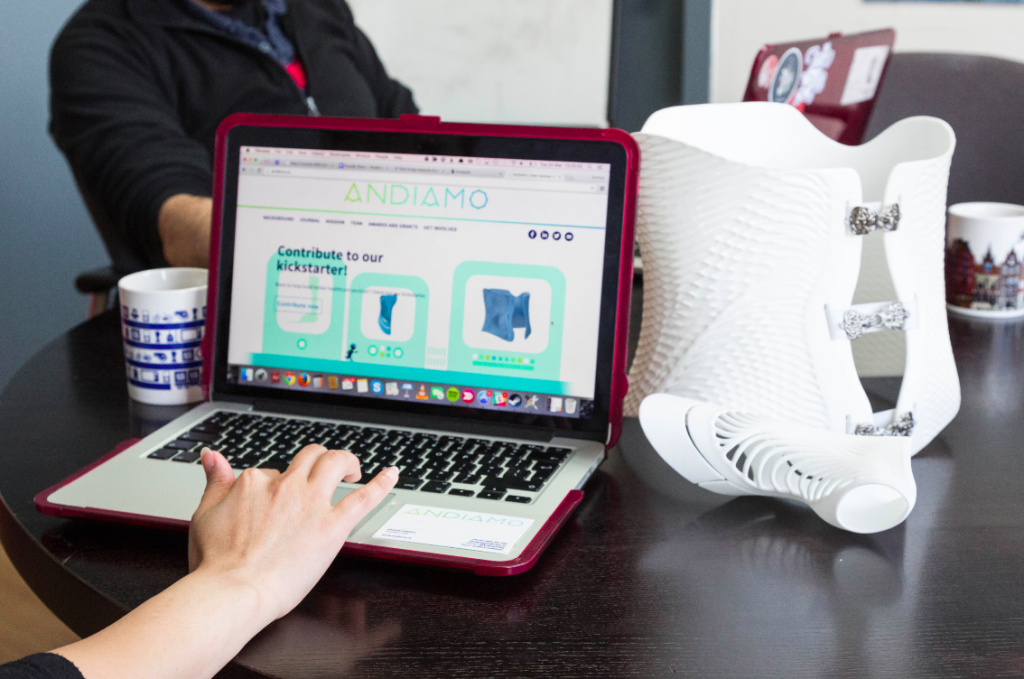 So why was there no one doing it for children’s orthotics?  Project Andiamo was born at that conference, and we spent the next 10 months researching this as we couldn’t believe that no one else was doing it. We needed an expert in technology, so we pitched our proposal to one of our friends, Lee Provoost who is also a tech guru, and he was so impressed with the idea that he joined us.

As a team, Naveed as CEO, my self as the COO and Lee as the CTO we started to work out how to make this happen. By November 2013 our mission had become to show how 3D scanning technology and 3D printing will reduce the wait times to get these orthotics from 6 months to 48 hours.

We had spoken to several funding bodies and were approached by a social impact funder called Bethnal Green Ventures. It was clear to us that they were the sort of people that could help us make this viable. Within six weeks we had produced three prototypes, proving viability at a fraction of the time and cost of current manufacturers.

The accelerator was for six months, and by the time we “graduated” we realised that the problem that we were trying to solve was the tip of an iceberg. And that Project Andiamo was going to have to change. Approximately a 100 million people worldwide need an orthotic, this is increasing by 6% a year. However capacity to serve these people is going down, in the UK there are just 270 orthotists serving 2 million orthotic users. This is the same picture all over the world.

The question we needed an answer to was: How will we get to each and every child who needs an orthotic when there aren’t enough people that can make them?

We needed to build a company that will solve this complex global problem and we couldn’t do this as a “project”. Andiamo was born.

We now know that we have to build a software that automates this archaic industry. A Software that learns about childrens’ body mechanics and can create the right orthotic first time round.

The route to this is by getting more families into our service now and making fitting 3D printed orthoses for their children. Not only are we helping families get better orthoses and a more pleasant experience, Andiamo can use that experience and data to build a platform that enables us to make orthotic service and products better, faster, and cheaper globally.

In January 2015 Rosie Unite joined us as our Chief Commercial Officer with over 25 years experience building businesses, to help us build a company that can solve this globally.
Our team has now grown to 11 people. All who truly believe that they can make a difference and take the company to the next level. With their help, we are now funded by NominateTrust, and are in the Big Venture Challange. Also, we are through to phase three of Future Internet CHallenge eHealth (FICHe), who’s aims are to accelerate SMEs and startups that develop innovative applications in the eHealth domain using FIWARE technology.

This journey started because I wanted to make our son’s life better. After he passed I had no idea what I would do. It took me a long time to realise that I had learnt so much and become an expert in so many fields because of him. We didn’t start Andiamo because we thought we might change the world, but because we wanted to turn our pain into something good.