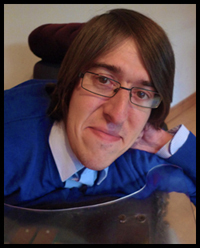 Last year, in this post,  Russell Smith wrote a wonderful guest post for us on assistive technology and some of the tools he’s been developing. I’ve asked him back to give us an update because I’m aware things have been moving on rapidly. 🙂

Last time we spoke I introduced you to CarePair and Articuloud, and those are still going very well. Articuloud is helping out a group of users requiring text to speech support, and we’ve developed it a little bit more, but I’ll tell you about that next!

CarePair has been the exciting project this year, being picked up by the BBC. They’ve commissioned a documentary, following four young people, who have disabilities, wanting to employ their own carers. The documentary follows the journey from interview to summary, seeing what happens during a week between the new employers and their first-time carers. I’m there with CarePair to help with interviews and issues, and I can promise it is going to make entertaining viewing! Also it will highlight how much of a need there is for carers and assistants out in the community, and demystify the situation, showing that it is both a rewarding job, and more importantly vital to the lives of so many of us.

What I didn’t mention in the other article is that my Father and I run a small development and supply company, Dad In A Shed  and our most exciting new development is eye gaze. We’ve teamed up with The Eye Tribe to develop a tracker and software that enables users requiring eye gaze to have access to it for under £300! We’ve implemented it with Articuloud and now can offer users requiring an eye gaze a system, complete with all the hardware, software and platform for under £900! Obviously we are facing a bit of criticism from the ‘big boys’, but taking our square peg in a round hole approach, we are opening up a market for people that it was previously closed to, and we are quite proud of that!