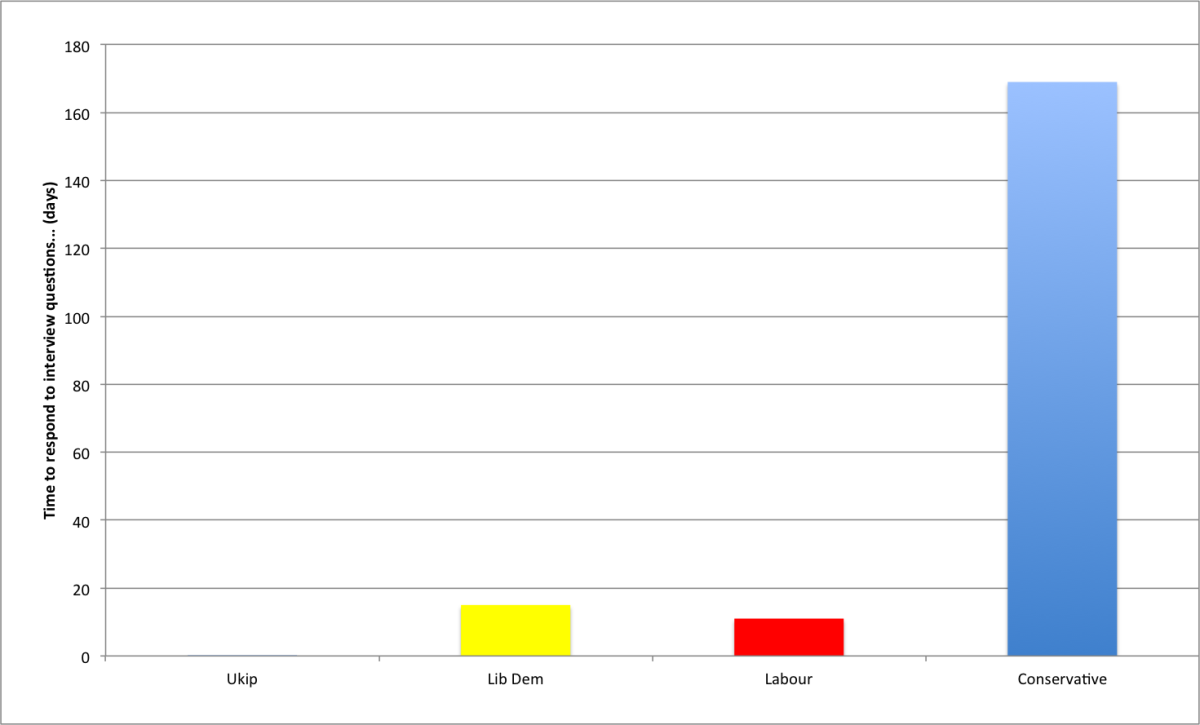 Today we have a little bit of background, a graph, and a couple of comedy moments with UKIP.

This blog has never been party political.  If you wish to see the world in terms of right and left then you can see posts you might class as extremely right wing,  interventionist, free market, and extremely left wing among a general ‘let’s all help each other, open-data-will-save-us’ theme.

This is partly because of the things I write about – data, technology, open information, social issues, innovation and Things That Are Cool And New.

However, 2015 is an election year in the UK (sorry US readers) and I think it would be good to be doing a certain amount of work putting out data, particularly disability relevant data, that can help people reason about the choices they should be making.

One of the advantages of being fairly widely read and being politically neutral is that you can get a certain amount of trust from all parties when you contact them.   So I contacted the four major parties, and requested an interview with their disability spokesperson.  These turned out to be:

Arranging the UKIP interview was one of my more comedy moments, entirely because of my own biases…  You see the phone call went like this…

Operator: (A sensible sounding woman with a pleasantly patient telephone manner): Hello, UK independence party.
Me: Hello, my name is Joe Reddington and I run a disability blog, I’m interviewing the disability spokespeople from each of the main parties and I’d wondered if you could put me in touch with your spokesperson?
Operator: Certainly, I know just who you need,  have you got a pen?
Me: Yes
Operator: Now hang on, because it’s a little bit of a funny name…

At this point I panicked.  I had a terrible thought that the name was going to be, ‘Pedro’, or ‘Siobian’,  possibly ‘Petra’.  I was horrifically aware of the possibility that the operator was going to be mildly racist over the phone and we’d have to have an argument.

I was unaccountably relieved, and I’d like to publicly apologise to the UKIP office staff for making a bit of a snap judgement based on this sort of thing.

More to the point, Star was easily the most efficient of the people I corresponded with.  I had her interview entirely completed with in a couple of hours. The total time I was in the UKIP system (as in, the amount of time between first contact and interview, less the amount of time that emails were sitting in my inbox) was only 185 minutes.

By comparison, this is the figures for the other three interviewees.

In defence of the Conservative Minister, I originally got permission to interview Mike Penning, and most of this delay was while he was Minister.  Plus there are difficulties co-ordinating the DWP and Mark Harper’s constituency office, and I imagine they had a little less free time and a bit more hoops to jump though than the others…. so we should definitely take that into account.  If you’d like to visualise this, here’s the graph:

For each interview I asked some questions unique to the candidate – and some that were largely the same across all interviews – I invited you to judge each of them on their answers. Some are more ‘political’ than others, and some more radical…

Of course, if you’d like to receive the interviews a little earlier than everyone else, then by all means subscribe for updates 🙂